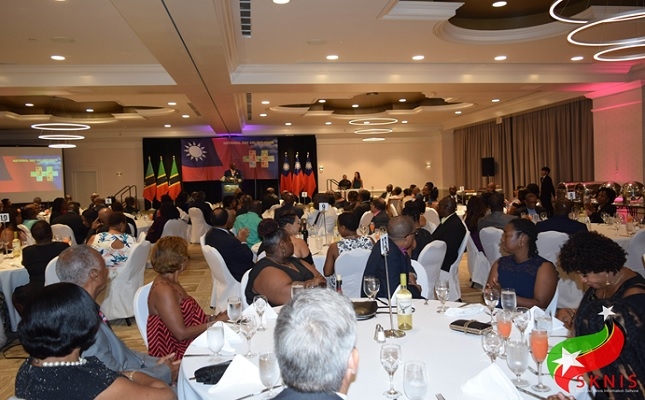 Top government officials in St. Kitts and Nevis, members of the Diplomatic and Consular Corps, as well as specially invited guests from the public and private sectors joined diplomatic staff from the Embassy of the Republic of China (Taiwan) in celebration of that country’s 108th National Day at the St. Kitts Marriott Resort on Wednesday, October 09, 2019.

The tenth of October or, as it is more commonly known “double ten”, is a holiday in Taiwan commemorating the start of the 1911 Wuchang Uprising in China, which marked the end of the Qing Dynasty, leading to the founding of the Republic of China on January 01, 1912. It is a day when Taiwanese pride takes precedence over everything else, and Taiwanese people both at home and abroad celebrate.
“I want to say that tonight is extremely special because it reflects our country and the outpouring of goodwill that exists and has existed for over 38 years,” said Prime Minister Dr. the Honourable Timothy Harris. “…We have remained faithful because the underpinning of the relationship was well thought through from day one,” Dr. Harris added, while noting the solid nature of the longstanding diplomatic relationship.
The Government of the Republic of China (Taiwan) has been giving assistance to St. Kitts and Nevis in the area of Agriculture since 1981, following a visit to Taiwan in late 1980 by the then Premier Kennedy Simmonds.Prime Minister Harris commended the visionary leadership of Dr. the Right Excellent and Right Honourable, Sir Kennedy Alphonse Simmonds that resulted in the establishment of diplomatic relations between the two countries during his tenure as Prime Minister of St. Kitts and Nevis. He congratulated Taiwan on achieving the 108th National Day and wished the country much success.
In his first official visit to the Republic of China (Taiwan) as Prime Minister of St. Kitts and Nevis, Dr. the Honourable Kennedy Simmonds and his delegation were guests of honour at Taiwan’s National Day Celebrations on Monday, October 10th, 1983.His Excellency Tom Lee, Taiwan’s Resident Ambassador to St. Kitts and Nevis, also commended Sir Kennedy and noted that, “Every year when we gather together to celebrate our National Day here, we are also celebrating the anniversary of the establishment of our relations which was established today, October 09…”
Ambassador Lee reflected on the relationship between both countries and noted that as a “strong ally to each other, Taiwan and St. Kitts and Nevis are always ready to help each other when the other is in need.” The relationship has been marked by several successful cooperative projects between Taiwan and St. Kitts and Nevis. They range from assistance in agriculture to social development, from education to recreation, from health to information technology, as well as renewable energy, sports, and tourism among others. His Excellency Tom Lee noted that this strong alliance will continue for years to come.
“Ladies and gentlemen, you can rest assured that our embassy and technical mission will continue to work hard to make sure that more and more people in this beautiful country can benefit from the fruits of our cooperation projects,” said the ambassador. “I am also confident that, through our joint projects, this close friendship between our two countries will continue to flourish in the years ahead. Let’s work together to seize the promise of today and live out tomorrow.”

Saint Christopher and Nevis Statutory Rules and Orders No. 19 of 2020 Emergency Powers (COVID-19) (No. 8) Regulations

inSKN.com is the premier information portal for St. Kitts and Nevis. Offering ongoing content lreating to news, events, business and more in the Federation of St. Kitts Nevis.